The Healing Power of Medicinal Mushrooms

Mushrooms are truly magical. We have always used mushrooms as food and medicine. In fact, many mushrooms have long been used throughout Asia for medicinal purposes. There are at least 270 species of mushroom that are known to have various therapeutic properties. The practice of using mushrooms in Chinese herbal medicines has been recorded in early records of the Materia Medica.

Although mushrooms are still harvested in their natural habitats, our ability to cultivate many different mushroom species has improved greatly over the past few decades. As a result, large numbers of scientific studies on medicinal mushrooms over the past three decades, especially in Japan, China and Korea, have confirmed the traditional uses and also demonstrated new applications for health benefits.

While much attention in recent years has focused on various immunological and anti-cancer properties of certain mushrooms, they also offer other potentially important health benefits, including antioxidants, anti-hypertensive and cholesterol-lowering properties, liver protection, as well as anti-inflammatory, anti-diabetic, anti-viral and anti-microbial properties. These properties have attracted the interest of many pharmaceutical companies, which are viewing the medicinal mushroom as a rich source of innovative biomedical molecules. 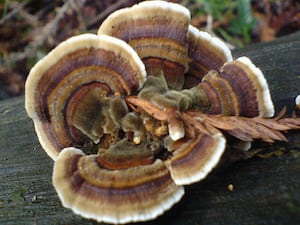 Coriolus versicolor (“multicolored mushroom”), also known as Trametes versicolor, is a mushroom readily found in woodlands in China and Europe and is the most commonly found polypore in the oak woods of the Pacific Coast in the U.S. It grows in clusters or tiers on fallen hardwood trees and branches, frequently in large colonies. As its name implies, it is often multi-colored, with contrasting concentric bands, variously appearing in shades of white, gray, brown, black, blue or even red. It has a thin, velvety fruiting body, usually 2- 7 cm wide, fans out into wavy rosettes, giving rise to its popular name, Turkey Tails.

Uses: Anti-cancer action: PSK has been shown to be effective against several cancers, including cervical cancer, in combination with other therapeutic agents; appears to enhance the effect of radiation therapy; PSP significantly lessened the side effects of conventional medical protocols used in the treatment of cancers of the esophagus, stomach and lungs, as well as significantly increasing the rate of remission in esophageal cancers.
Cardiovascular health: Lowered cholesterol in animal studies.
Immune enhancement: PSK increases interferon production, as well as scavenging superoxide and hydroxyl free radicals, has demonstrated anti-viral activity, possibly even inhibiting HIV infection. 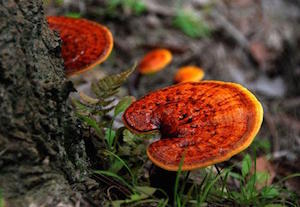 Ganoderma lucidum (“shining skin”) is a visually striking polypore with a hard woody texture and a shiny, varnished appearance. It primarily grows on oaks, plum trees and other hardwoods, and has a 2-20 cm semi-circular or kidney-shaped cap, variously colored white, yellow, blue, red, purple or black. Ganoderma species are found worldwide, though the Chinese and Japanese species have been studied the most extensively for their therapeutic value. It is somewhat rare in the wild, and so in recent years has been commercially cultivated, making it more widely available. In the West it is usually known by its Japanese name, reishi. 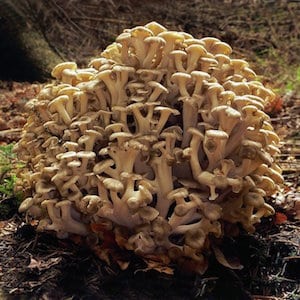 Polyporus umbellatus (“umbrella-like polypore”), also known as Grifola umbellata, is a white-to-gray mushroom that grows in dense rosettes from a single stem. It is found in deciduous woodlands in China, Europe and Eastern and Central North America, growing from dead tree stumps or the roots of birches, maples, beeches and willows.

Uses: Anti-cancer actions: Used in the treatment of lung and other cancers; has demonstrated pronounced anti-tumor activity in in vitro and in vivo animal studies; helps reduce the side-effects of chemotherapy.
Immune enhancement: stimulates and enhances the performance of the immune system and accelerates production of IgM and strengthens the power of monocytes.
Liver health: can help alleviate symptoms of chronic hepatitis; was used as part of an herbal formula that cured 17 of 39 patients with cirrhosis of the liver, and brought about significant improvement in 19 others. 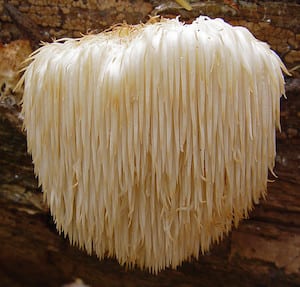 Hericium erinaceus (“spiny hedgehog”) is a snow-white, globe-shaped fungus composed of downward cascading, icicle-shaped spines. Its striking appearance gives rise to its various common names, Lion’s Mane, Monkey’s Head and Hedgehog Fungus. It grows up to 40 cm in diameter on dead or dying broadleaf trees — such as oak, walnut, maple and sycamore — and is found in China and Japan, as well as parts of Europe and North America. It is considered a gourmet mushroom, long popular with forest folk, with a flavor variously described as reminiscent of lobster or eggplant.
Uses: Anti-cancer effects: Helps in the treatment of esophageal and gastric cancers, may extend the life-span of cancer patients.
Digestive enhancement: Promotes proper digestion; effective against gastric and duodenal ulcers and gastritis.
Immune enhancement: Protects the gastrointestinal tract against environmental toxins, inflammation and tumor formation, an extract was used as part of a protocol that helped increase T and B lymphocytes in mice.

This blog is a repost of an article published by Dr. Isaac Eliaz, M.D., M.S., L.Ac. It is not intended to treat, diagnose or cure. For more information, please visit www.dreliaz.org.