While mycelium wears a lot of hats, it has one primary job – to turn everything into soil, and then to feed the plants and trees that surround it. With an amazing intelligence, it’s wraps its mycelium filaments – called hyphae – around the roots of plants and trees. Fungal hyphae and plant roots working together are called mycorrhizae and it’s truly a symbiotic, life-giving relationship that sustains entire ecosystems.

The mycorrhizal filaments of fungi also produce organic compounds that glue soils together and improve their structure and porosity to enhance root growth. In addition, mycorrhizae in the soil have been found to protect plants from root diseases. 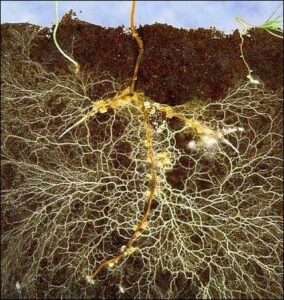 “It adds up to a fundamental mutualistic relationship between fungi and green plants, one that has been evolving for millions of years,”

“Most plants – from orchids, rhododendrons and madrone trees to most fruit and nut trees, turf grasses, annuals and perennials – depend on some type of fungal activity.”

So, consider the role mycorrhizal fungi can play in the garden or farm ecosystem. A few of the beneficial effects of these fungi are that they:

Compliments of the Smiling Gardner, here are 9 tips to keeping your soil’s beneficial fungi happy and healthy:

Phosphorus fertilizer. Don’t use too much, especially chemical phosphorus. When plants have ample access to soluble phosphorus (soluble means it dissolves in water, so is easier to take up by plants), they aren’t as reliant on mycorrhizal fungi, so they don’t allow the fungal infection to occur with their roots as much. That means by using soluble phosphorus fertilizer, we’re interfering with how nature provides plants with phosphorus, so we’ll need to take over the job of the fungi and continue to fertilize our plants every year. Even fresh manure can oversupply phosphorus. Rock phosphate is okay because it’s insoluble – it actually needs to be worked on by microbes such as these beneficial fungi in order for plants to most effectively use it.

Other fertilizer. Other than phosphorus, over-fertilizing in general can inhibit mycorrhizal fungi, so it’s good to fertilize just a little at a time. That’s why I often take the fertilizer recommendations from my organic soil lab and split it up into 2-4 applications during the year instead of all at once. Too much nitrogen seems to be the next big issue after phosphorus, and sulfur is another big one too because it’s antimicrobial. Many soils are deficient in sulfur, but if we use gypsum or potassium sulfate (both contain about 18% sulfur), that’s going to be less damaging to fungi than elemental sulfur (90% sulfur), which is much more soluble.

Pesticides. ‘Cide’ means to kill. Fungicides kill fungi, so using them can harm mycorrhizal fungi. But so can herbicides, insecticides and other pesticides. Just spraying a pesticide once isn’t going to knock out your whole fungal network, but repeated applications, especially of certain pesticides such as methyl bromide, will kill most of your microbial soil life (most countries stopped allowing methyl bromide use years ago, but the U.S. still allows it as of this writing). 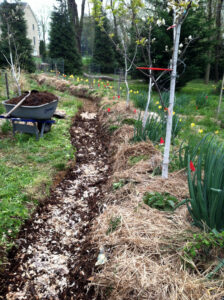 Mulch. Maintaining a consistent mulch of leaves, straw and perhaps some wood chips will provide protection and habitat for the fungi. I don’t like to use too many wood chips, but they do encourage fungi, so I will use them around trees and shrubs, which want a more fungal-dominated soil. A living mulch (a groundcover or cover crop) is also useful to give beneficial fungi more plants to partner with.

Diversity. Mycorrhizal fungi benefit from having other microbes around, including beneficial bacteria, so while compost doesn’t provide the fungi itself, it does support them, as does using compost tea and effective microorganisms. Plant diversity is also beneficial, which is one reason why crop rotation can be helpful, and why leaving some weeds and wild areas to grow is, too.

Water. Like us, fungi need water, but they also need air, so if your soil is so wet that there’s not enough air, the fungi will suffer. But even if your soil is just consistently moist (perhaps from your irrigation system watering for 15 minutes every morning), that’s also an issue because the fungi won’t have any reason to go searching deeper in the soil for moisture. We face the same issue with plant roots. We want roots and fungi to spread out and go down, so we need to let the soil dry out a little between waterings.

Tilling. Tilling, plowing and double digging will slice your fungi up into pieces. It can sometimes be useful to do one of these when you’re first establishing a garden, but in the long run, it’s better to limit them to only when the benefits outweigh the downsides, which may be occasionally, or may be never. Sometimes they’re useful to lightly incorporate a cover crop or control weeds, but otherwise, less soil disturbance is usually better.

Other soil disturbance. Topsoil removal during construction is devastating to fungi. Compaction is detrimental as well, as is erosion. On a farm, there’s usually more bacteria than fungi in terms of biomass (weight). In a forest, there’s 5, 10, 100, even 1000 times more fungal biomass than bacteria! Main reasons for this big difference are the lack of tilling/plowing, compaction and erosion in a forest, plus the lack of pesticides being sprayed, and the plant species growing there.

9 Ways To Help The Beneficial Fungi In Your Soil, The Smiling Gardener

Posted in: Fantastic Fungi, For the Explorer Author: Louie Schwartzberg