Since my children were born I have put on a couple of pounds every few years and every time it happens, I get uptight about it. Over the years I’ve tried tweaking my eating habits in order to lose the weight without heartbreak. In fact, every New Year’s resolution includes something about losing those extra 5 pounds. I’ve tried the shake thing (filling but depressing), the no carb thing (my tongue felt greasy all the time), and the just-have-a-cigarette-instead thing (absolutely ran me down). And then I read the studies conducted by Lawrence Cheskin MD of John Hopkins Bloomberg School of Public Health in Maryland.

In 2008 Dr. Cheskin conducted a two-week trial comparing the palatability and the effect on appetite of using mushrooms as a replacement for meat.

The study was financed by the Mushroom Council, a research and promotion organization that was mandated by Congress in 1990.* Two groups of people took turns eating otherwise identical recipes featuring either meat or mushrooms (meat or mushroom lasagna, savory Napoleon, sloppy joe, and chili). The meat entrées averaged 783 calories each; the mushroom entrées averaged 339 calories. The subjects were randomized to consume all four meat entrées or all four mushroom entrées in the first week, and then ate the alternate mushroom or meat versions of the same entrées in the second week. The result of substituting mushrooms for meat in four meals out of eight resulted in subjects consuming about 1485 fewer calories over the four-day mushroom portion of the test than they did over the four-day meat test period—an unsurprising result. 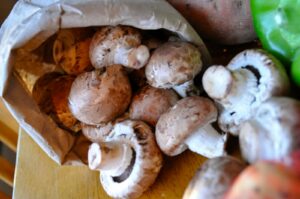 What was surprising was the palatability ratings, which in this test described how full the subjects felt. The results were similar for meat and mushroom recipes. According to the study, “There were no significant differences in ratings of appetite, satiation or satiety between the meat and mushroom condition… despite the sizeable reduction in fat and energy content it produced.” That subjects who ate mushrooms instead of meat consumed an average of 420 fewer calories per meal, but didn’t need to compensate for the diminished calorie intake by eating more food later in the day. The study suggests that eating mushrooms in place of foods like ground beef could be a strategy for controlling weight gain without sacrificing satisfaction.

A follow up trial commissioned by the Mushroom Bureau of the UK, and conducted by Sarah Schenken, a British dietitian, had similar findings. In 2013 Dr. Cheskin and colleagues completed a similar, one-year randomized clinical trial with 73 subjects that showed the dietary significance of mushrooms. Subjects lost weight, and kept it off if they stayed with the diet, and saw improved lipid and inflammatory markers.

I decided to test the mushrooms for meat idea on myself. 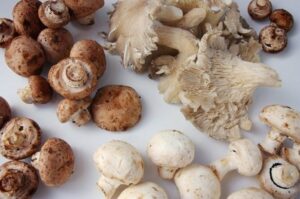 I changed none of my habits beyond replacing meat and poultry—which I usually ate about four times a week–with mushrooms in my dinner recipes. I continued to eat fish or eggs at dinner, work out or do yoga three or four times a week at the gym, still ate cereal in the morning and cheese and vegetables at most lunches, and drank a glass or two of wine every night. I also liked a little sundae a few nights a week (vanilla ice cream, Kahlua, ground up amaretto cookies). I started at 127 pounds (a few defiant pounds over my normal weight), and ate three meals a day with a snack (sometimes a handful of nuts, other times a yogurt). For three weeks I pretty much stuck to it, although a few of those nights I went out to dinner or cooked a dinner party with beef, or pork, or duck, and in one case (an awesome bollito misto), all of the above. A couple of martinis were consumed during those weeks as well (my son got a day’s suspension from high school, my daughter decided she hated college and took a bus home). Overall, I lost a little less than 2 pounds a week and never felt it.

The Greeks believed mushrooms gave warriors strength in battle. That notion may be rooted in their history, but it’s not without some truth as well. 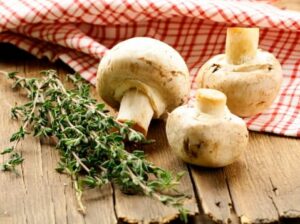 The greatest challenge in meeting human nutritional requirements is supplying adequate amounts of protein. Mushrooms contain all nine essential amino acids, which are needed to produce high-quality protein. (Mushroom nutritional values change from species to species, sometimes quite a bit, but for the sake of simplicity, I’ll focus on the readily available Agaricus bisporus, that is, the white button mushroom, crimini, and portobello.) So the reason why I felt satiated on the mushroom diet was because of that high quality protein. But mushrooms provide that high quality protein in low volume, which is why they are less fattening than other good protein sources. A middle aged woman my weight supposedly needs about 21 grams of protein a day. An 84-gram serving size of mushrooms–four to five white button mushrooms–offers 3 grams of protein, about 7% percent of the daily value. In order to fulfill my protein requirement I’d have to eat about 60 mushrooms a day.

However, when mushrooms are eaten in conjunction with other foods, they can lift those foods nutritionally. For example, cereal protein is characterized by a low level of the amino acid isoleucine. According to a Polish review of research on mushroom nutrition, “The consumption of mushrooms with cereal products [like a mushroom barley soup] is recommended for balancing the level of essential amino acids in the diet.” For vegetarians and vegans who do not eat the more common sources of amino acids, mushrooms should be a key food.

Now, when I think about what to serve for dinner, I don’t only consider meat, fish, or poultry as worthy entrées. These days, I turn to mushrooms, too.