Moving Art, the astonishing and mesmerizing theater of natural wonders choreographed through the lens of cinematographer Louie Schwartzberg, is now streaming in its third season on Netflix.

While Louie’s images, shot in time-lapse, high-speed, and macro cinematography techniques, are the star of this feast for the senses, the accompanying soundtrack captures the sensuous sounds of an eclectic gallery of critically acclaimed worldwide musical artists. 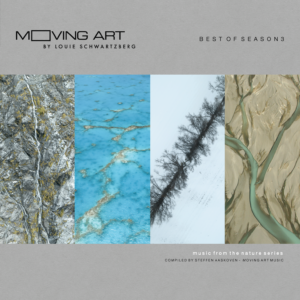 The Moving Art series has no narration, just great imagery. It tells a story without the old-fashioned model of the “kill-or-be-killed” model that is typical of nature documentaries. Instead, the series takes viewers on a journey through time and scale, exploring different ecosystems from desert flowers to Big Sur to Galapagos to Tahiti.

“I give composers a tremendous amount of creative freedom,” says Louie, the critically acclaimed filmmaker behind Moving Art and Fantastic Fungi (the #1 documentary in Apple TV). “I ask them to be as creative as possible and give them complete creative latitude. Because they are my partner in the storytelling, where the music and the visuals have a 50-50 relationship.”

Listen to stories and a live performance from Lisbeth Scott, composer for the Machu Picchu episode on Season 3 of Moving Art. Ms. Scott recently joined Louie for a conversation about creativity, inspiration, and the healing power of music on our Wonder & Awe podcast.

MORE ABOUT THE ORIGINAL SOUNDTRACK

From composer the interwoven instrumental and vocal tapestries of passionate sound texturalist Lisabeth Scott to the electrifying strains of “Master of Music in Performance Violin,” Mahuia Bridgman-Cooper, to the one-of-a-kind orchestral synth tracks and ripping guitar riffs of Samuel Flynn Scott, Lukasz Buda, and Conrad Wedde, the New Zealander trio known as “Moniker,” this soundtrack album is destined to become not only an international sensation, but a statement of hope in troubled times that will shine on into the future as a beacon of human progress.

The creative collaboration between Louie and Steffen Aaskoven began in 2006, when the filmmaker met the founding member of the Danish electronic music project, Bliss. Louie wanted Bliss to score his next film, Wings of Life for Disney.

“Bliss had never scored a traditional film before, so this was a bit of a risk,” said Louie. “But I kept on pushing hard because I believed in their music. I thought it’d be the perfect music for the movie. Wings of Life has this romantic quality because Meryl Streep tells the story of bees, bats, hummingbirds, and butterflies all being seduced by flowers for pollination to occur. Bliss’s music was, for me the most romantic and emotional music I’ve ever heard, so I thought they would be perfect.”

Bliss scored the soundtrack to Wings Of Life between 2009 and 2010, and the soundtrack was released in 2013. Steffen and Louie continued to work together on Moving Art, and the release of the Season 3 soundtrack for the hit documentary series marks a major milestone in their creative collaboration.

Over ten weeks, beginning on September 1st, you can preview tracks from the album, with accompanying videos that will be released on a host of music, social media, and other outlets. Upcoming weeks will feature interviews with the artists on the movingart.com blog, as well as an episode of Louie Schwartzberg’s Wonder and Awe podcast featuring the new music of Moving Art on Netflix.