A Chat Among Friends: Louie & Eugenia

with Louie Schwartzberg and Eugenia Bone 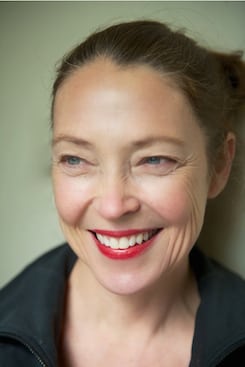 Her stories have appeared in newspapers and magazines across the country, from The New York Times Magazine to The National Lampoon, Epicurious, Saveur, Food & Wine, Gourmet, Fine Cooking, The Wine Enthusiast, and Martha Stewart Living, among many others. She also writes a blog, Well-Preserved, about food preservation and the ecosystem of the kitchen, for the Denver Post, and is co-president of the New York Mycological Society.

A sought-after lecturer, occasional teacher and live presenter of preserving and mushroom cooking, she can be found in venues like the Museum of Natural History, the Denver Botanical Gardens, and the New York Botanical Gardens sharing her expertise with foodies and foragers alike.

Though her first 3 books received global recognition, including a James Beard Award nomination and numerous “Best Book” lists, it was her fourth book, Mycophilia, that she claims was the most profound writing experience of her career.

At the Bertrand Delacroix Gallery in New York City, where Louie’s time-lapse and macro-cinematography was featured for the launch of Vizio’s P-Series, Eugenia chatted with Louie about her love for wild mushrooms and how she came to be obsessed with fungi. Here’s a small excerpt from their discussion: 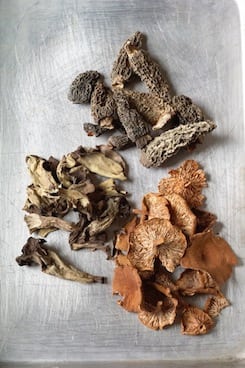 Louie (LS): What did you know about mushrooms when you started out writing Mycophilia?

Eugenia (EB): I didn’t know jack about mushrooms, but then I learned some basic stuff and learned that fungi is everywhere. That totally surprised me. I started reading and studying and learning more. I became increasingly obsessed and met all of these strange amateur mycologists, this really quirky crowd, and became an aficionado in the culture of amateur mycology. But what was really transformational for me was that through fungi, I came to understand nature in a deeper way. Fungi was the window through which I accessed a more complex picture of biology. How things are interrelated. It was a spiritual experience.

LS: It’s sort of the foundation of life. Do you see it as decomposition or composition? Is it the beginning or the end of life?

EB: (laughs) Yeah! Yeah. God. I guess it’s both, you know, because a cycle is a cycle. Fungi effects weather, weather effects plants, plants effect mammals, mammals effect bacteria. Cycles aren’t even where its at. It’s more of a web.

LS: So, how did you eventually get into this beloved relationships with mushrooms.

EB: Through culinary. I loved wild mushrooms. I’d seen them wanted to be better at getting them. Seen them wild in a place I have in Colorado. When the season’s good, they are copious. I wanted to become prolific at gathering wild mushrooms. I grew up in an Italian household and we didn’t do sporty things like sailing, we foraged. Dandelions, blueberries and mushrooms. 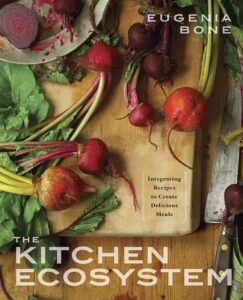 For more information about Eugenia Bone and her new book, The Kitchen Ecosystem, please visit The Kitchen Ecosystem | The Practice of Integrating Fresh, Preserved, and Supporting Recipes into Cooking
Photo credits: Ben Fink shot the food image and the author’s picture is by Huger Foote.

Have a Q for Eugenia to A?

Have questions for Eugenia about mushroom cooking or preserving? Post your question in the comments section below and she will be responding to select questions over the next week.